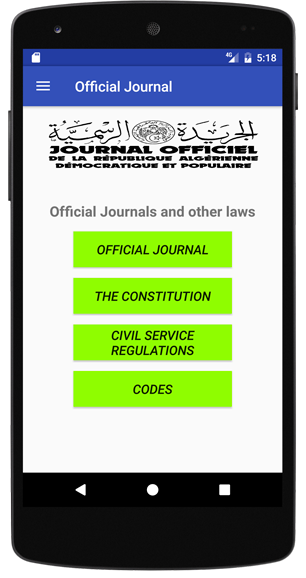 Journalofficiel is a mobile based application that facilitate the access and consultation of Algerian laws. It gives its users an easy access to the the Official Journal as well as the differents laws and regulations of the country and aspire to help them in their daily activities and projects.
journalofficiel is a personnal project of its developer. Even if the project is entirely based on the official publication of the Algerian Governement, but neither the project (mobile application or website) itself or its developer has any relation or claim to be substituted for the government or its representatives, which (the governement) remains the only official source of this kind of publication.
The App is fully available in both french and Arabic while the English version is just limited to the interface and some features, since the official gazettes are only published in Arabic and French.